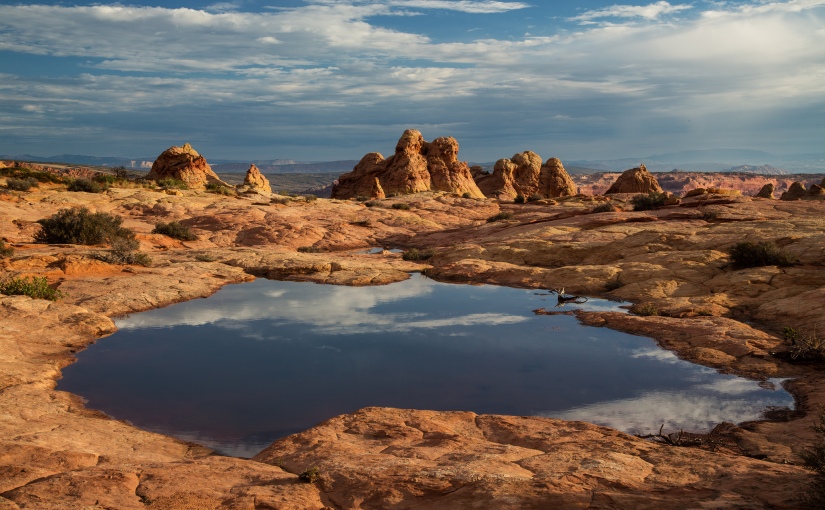 The following is a sample comment script. Please do not cut and paste!  Edit the script to make it your own and add personal commentary.  These scripts are designed to inform and are for inspiration and ideas! For ideas on how to write a strong submission, click here: “Suggested Outline or “Hot Topic” Review List for Comments.”

Vermilion Cliffs, created in 2000, is home to California Condors, whose population is being enhanced through breeding programs.  It’s a geological wonder house with 2500 foot deep Paria Canyon, the orange, yellow, and reds of the Coyote Buttes, and of course the spectacular cliff faces of the Vermillion Cliffs.  The Wave in the Coyote Buttes has fossilized sand dunes that appear to be petrified as they wind and rise throughout the area.  The longest slot canyon in the southwest is Buckskin Gulch, where guides can help you navigate its sinewy course.  This is considered to be one of the best backpacking places in the world.  I was unfamiliar with fishhook cactus, which is also called compass barrel cactus due to its habit of leaning to the south, but this sensitive species grows here as well.

According to the Arizona Department of Tourism, 42.1 million people visited Arizona in 2015, spending $21 billion, which generated $2.99 billion in tax revenue.  The town of Page in northern Arizona has found that 43% of its visitors are international while 51% are out-of-state helping to support this area and appreciating the stark beauty and wildness found here.

The Vermilion Cliffs area in northwestern Arizona has had some small production of uranium, but the AZGS concludes “ there is little geologic evidence for economic minerals deposits in the monument.”

The remains of larger and small villages of the Anasazi and Paiute culture can be spotted throughout the monument, and a trail called the Honeymoon Trail, which Mormons used to cross from Arizona into Utah to have their marriage solemnized in the Mormon Temple is still present.  John Wesley Powell visited this area in 1871.

This part of northern Arizona deserves full protection as a national monument due to its unique geology, its wildness, and its impact on tourism in Arizona.  It is a unique sanctuary that Theodore Roosevelt would be pleased to know that it helps to keep Arizona both wild as well as fiscally sound.  Its area must be preserved as is in order to retain its wildness and the species that depend upon it.

One thought on “Our Treasure, Our Future – Vermilion Cliffs National Monument”